WANNA KNOW WHAT IT’S LIKE ON AN ACTIVE GALAPAGOS TOUR? -
Banner

WANNA KNOW WHAT IT’S LIKE ON AN ACTIVE GALAPAGOS TOUR?

WANNA KNOW WHAT IT’S LIKE ON AN ACTIVE GALAPAGOS TOUR? : The thing we loved the most about our Intrepid Travel Active Galapagos Adventure was the fact that we stayed on land each night.

It gave us an intimate view of life on the islands. I bet you didn’t know this, but 28,000 people live on the Galapagos Islands of Ecuador and contrary to popular belief, you don’t have to stay on a boat.

WANNA KNOW WHAT IT’S LIKE ON AN ACTIVE GALAPAGOS TOUR?

We were wary about not being on a cruise. We thought that it was the way to do the Galapagos Islands and when we chose our adventure with Intrepid in January, I have to admit we didn’t dig deep into the research.

It wasn’t until we returned from Antarctica that we actually looked closely at our itinerary and saw that we weren’t on a cruise ship.

“Oh no” we thought to ourselves, “isn’t the Galapagos Islands all about cruising from destination to destination?”

It turns out that we wouldn’t have done it any other way. We had plenty of time in the water snorkelling on five different occassion where we swam with sharks, played with sea lions and watched iguanas chomp on algae while the famous Galapagos giant turtles swam by. 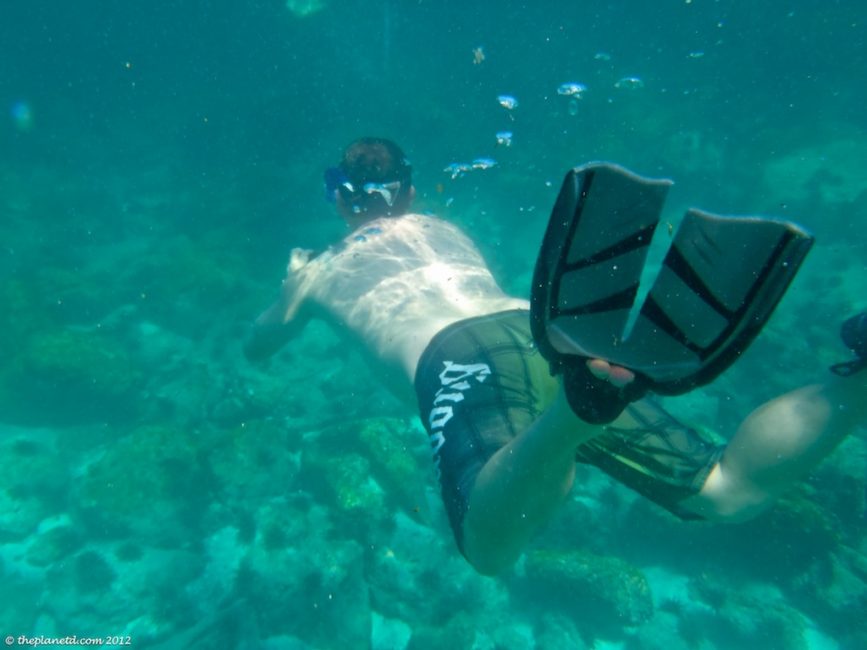 Dave Taking a closer video of the wildlife

We kayaked in the bay of St. Isabella where sea lions followed and jumped alongside our boats and we lazed on secluded beaches on pristine white sand.

What really struck home was when we talked with our guide Sambo. He told us that many people don’t realize that they can stay on the Galapagos Islands.

The come here and give their money to the large corporations who own the ships and the local people never see a penny. With tours like ours, the money goes directly to the local economy.

We ate at local restaurants, had the evenings to walk around the island and shops at stores and markets and drank fresh Ecuadorian coffee at locally run coffee shops each morning. It was heavenly.

Our favourite island was San Cristobal. It had that laid back feel of a Caribbean town with the unique atmosphere that only the Galapagos can have.

Sea Lions slept on park benches and waddled through the streets while Boobies, Frigate Birds and Pelicans basked in the sun.

We spent 2 nights on San Cristobal where we started off with a downhill mountain bike ride followed by a nature walk and stop at the beach fabulous meals at local eateries. The fried white fish was my favourite! and had amazing snorkelling from our own personal boat that we had for the entire week.

Our Boat in the Galapagos Islands

OFF TO SAN ISABELLA

En route we stopped for some fantastic snorekeling where we really got up close and personal with sea lions. We even stopped at the island of Florenza for a hike in the jungle to explore a Pirate’s Cave and have our first encounter with the giant Galapagos tortoise.

Feeling thoroughly exhausted and sun burnt from the past couple of days, it was straight to bed after our buffet dinner at our family run guest house on San Isabella.

It’s a good thing too, we had an early start for our volcano hike the next morning through the spectacular lava fields and cones of the still active Sierra Negra. The last eruption only happened in 2005 and we hiked around the world’s second largest Calderra. (If you are wondering, the largest is in Yellowstone, USA)

Dave and Deb at Sierra Negra Calderra in Galapagos

It was on this island that we had dinner at the coolest restaurant/bar on the beach, Bar de Beto. We had delicious coconut shrimp, but it wasn’t necessarily the meal that caught our attention as much as the atmosphere.

Located directly on the water they had a huge fire burning and cool music playing. This is definitely a place for chillling.

We spent three glorious days on this island, kayaking, hiking, cruising and spotting iguanas. I can’t decide it the snorkelling was the highlight or if it was the kayaking.

Having a Blast Snorkelling with Active Galapagos

Interacting with sea lions above and below the water is an incredible experience and as we paddled along the shore, sea lions played and followed our kayaks for the entire excursion. They are so curious and cute, you just want to sweep them up and cuddle with them.

This is the point where all the large cruise ships stop and it felt like Grand Central Station. This is the tourist hub of the Galapagos and Bermuda shorts and Hawaiian shirts were abundant.

That’s ok though, they were all standing in line to wait for their zodiacs back to their ships as we had the evening to enjoy drinks at the local bars and shop at the local shops.

We had two days here where more hiking, sea turtles were on the agenda, as well as a trip to the Charles Darwin Station.

We even had the opportunity to surf on the most pristine beach you’ll ever see. Unfortunately we were on round two of our sunburns so we passed on more sun and spent the afternoon walking along the vibrant streets of Santa Cruz shopping for souvenirs and enjoying a much needed siesta after this action packed, extraordinary travel through the Galapagos Islands of Ecuador.